Are you a paraskevidekatriaphobe?
If so, your worst fear is just round the corner. Tomorrow is Friday the 13th, a day that many people dread. 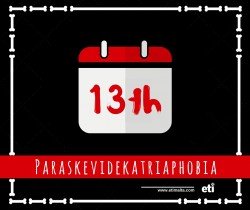 Noone knows the exact origin of this superstition. However the number 13 and Friday have both been considered unlucky for centuries.

In the Bible,  Jesus was crucified on a Friday . Judas, who betrayed Jesus, is thought to have been the 13th person at the Last Supper.

In Norse mythology, a 12-person dinner party, hosted by the God Odin is crashed by a 13th person, Loki, the god of evil and turmoil who plunges the world into darkness.

In Geoffery Chaucer’s Canterbury Tales, written in the 14th Century, he describes Friday as a day of misfortune and bad luck.

In Medieval Britain, Friday was known as Hangman’s Day as it was usual for executions to happen on a Friday.

So when and how did Friday and 13 join forces to become one of the most infamous dates?

In 1881, an American Association, The Thirteen Club was set up to improve the number’s reputation and to break all established superstitions. The group of 13 met up on the 13th of each month, they would break mirrors, spill salt and walk under ladders. This group went from strength to strength however their notoriety just publicised the date and added to its notoriety.

The publication of the book by Thomas Lawson, called Friday the Thirteenth and Paramount’s film, released in 1980, Friday the 13th , just helped cement the date into the public’s consciousness and establish the myth.

So is Paraskevidekatriaphobe an irrational fear? Perhaps. However in 1993, an article appeared in the British Medical Journal which looked into the relation between ‘health, behaviour and superstition surrounding Friday the 13th in the United Kingdom’.

It found that although fewer people travelled on Friday 13th, hospitals reported more admissions due to accidents on those days than there were on other Fridays.
Strange indeed!

Tuesday the 17th not Friday the 13th

The fear of Friday the 13th, is mainly an English and American fear. In fact, in Spanish-teaching countries it is Tuesday, not Fridays that is considered unlucky.

In Italy, it is actually Friday the 17th that is considered unlucky and not the 13th.

There are various ways you could use the theme Superstitions or Good Luck and bad Luck in your classroom. Here are a few we particularly like:

Use our graphic as a lead into a discussion class about superstitions.

Ask your students in pairs or small groups to discuss theses superstitions.

Do they know what these superstitions are?

Do they know where these superstitions came from?

Do they agree that these can bring bad luck?

Ask them to report back to the class.

Ask your students if they believe in Good Luck or Bad Luck. Ask them to think back on a time in their lives that they believe either good or bad luck played a part.

Put them into pairs and ask them to tell their partner their story.

Ask each student to report back to the class, their partner’s story.

Use the song Superstition by Stevie Wonder as a way to improve your student’s listening and writing skills. The website efl-resource has a great lesson plan for teens and adults. This lesson will work best with intermediate and upper intermediate students. Click here for this resource. Read all about our top tips on using songs as a teaching tool.

We use the first conditional to talk about things that are likely to happen.

Prepare a number of images such as :

If + simple present , will +verb

E.g. If you break a mirror you will have seven years of bad luck

For more teaching ideas, join us on one of our teaching courses.

We are recruiting -2022: EFL Teacher
Bildungsurlaub 2022
How COOL is that?