How COOL is that?

The EU-co-funded COOL project that ETI is currently involved in took off in September 2018, and has now reached the end of its first semester.

So … what has been happening in the meantime?

The COOL Project (http://languages.dk/#Cool) is centred round a very useful tool called CLILStore. Many teachers (and their students) already use CLILStore to create a unit where:

You can also have a look at a video which explains how to create a CLILStore unit ….. at least, until now:

Why until now? Well, starting in September, the existing CLILStore has been undergoing changes.

CLILStore used to ‘live’ on a server at Sabhal Mòr Ostaig (SMO), a college on the Isle of Skye where every subject is taught in Scottish Gaelic.

As you can imagine, the Isle of Skye often has stormy, windy weather, and occasionally, this is used to affect the server, and the hundreds of CLILStore users.

Well, that has changed now! One of the new changes to happen is that CLILStore is now hosted in the cloud, so bad weather on Skye will no longer be an issue.

Across the water from Skye is Ireland, where one of our partners (the Univesity of Ulster) is based in Belfast. In Ireland, they have leprechauns, as anyone who has ever celebrated St Patrick’s Day will know. On Skye, they have fairies, fairy glens, fairy pools and selkies (now wouldn’t reading this in CLILStore have been great? You could have clicked on ‘glens’ and ‘selkies’).

And at SMO, the main fairy working his magic on CLILStore is a wizard called Caoimhin. Think of Dumbledore, Gandalf and Merlin, King Arthur’s wizard, all rolled into one…. that’s Caoimhin, and that’s just how powerful his magic is. The old server I mentioned before sits on (or is it under) his desk, and is affectionately called Tarbh, which means Bull in Gaelic. I would have sworn bulls are part of a Mediterranean culture, and bulls being associated with Valencia would immediately come to mind. But, I have learnt, the bull is also extremely important on the Isle of Skye, and is a symbol of SMO.

Caoimhin has been steadily making changes to CLILStore, some of which were already identified in the project application, and some based on proposals by the rest of the COOL teams.

For example, one of the things that Caoimhin has been working on now is getting CLILStore to create vocabulary lists for students to recycle the new words they clicked on. Teachers who give their students a link to their CLILStore Unit can also see which words their students clicked on most, which can help teachers target these words for recycling and further work.

How cool is that? Quite, actually, I think!

Another thing we are working on at the moment is trying to give CLILStore a new, clean and more modern look, to make it more user-friendly and intuitive to use.

So, much is happening behind the scenes, and being tested by all the partners, who besides SMO, the University of Ulster and ETI, include the Universidad Politécnica de Valencia (ES),  Kroggaardskolen (DK), FAZ (DK) and Liceo Scientifico Statale Elio Vittorini (IT). An excellent mix of teams with a wealth of background on various projects.

The University of Valencia is the lead partner on the project, which is why the first Project Meeting in December was held in Valencia. The next Meeting in May will be held on the Isle of Skye in May, where we will be able to discuss the Outputs achieved so far, and the next Outputs to be worked on. And meet Tarbh of course! 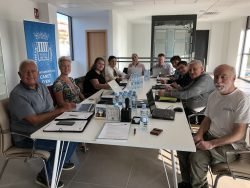 As soon as all the new changes have been implemented, we will be producing a Guidebook to the new CLILStore and Tutorial Videos for users to learn how to use the upgraded version.

More news later on as the Project progresses.

And if you want to read through this unit in CLILStore to be able to look up new words, follow this link.

We are recruiting -2022: EFL Teacher
Bildungsurlaub 2022
How COOL is that?